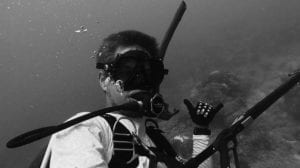 Ryan Bonhag is 29 years old and the senior dive instructor here at Aquarium Encounters. Ryan has been diving for 11 years, he is a PADI instructor and more recently a NAUI instructor as well. Originally from Olney, Maryland, Ryan started diving at the age of 18, in quarries and lakes. He enjoys introducing people to the diving world, and will be teaching our summer camp sessions for the second year here.

After graduating from the University of South Carolina, with a degree in Marine Science, Ryan moved to South Africa. On this amazing adventure in Mossel Bay, South Africa, Ryan studied Great White Sharks. He compiled pictures of Dorsal fins for Fin IDs, since every sharks fin is similar to a finger print. He also participated in satellite tagging, and tracking of Great White sharks, and general research of other smaller shark species. Ryan hopes to be a part of the Aquarium’s Great Hammerhead Project, which includes satellite tagging and research of Great Hammerhead Sharks.

After South Africa, Ryan moved to the Florida Keys to complete an internship at Rainbow Reef to become a dive instructor. After a year with Rainbow Reef, Ryan moved to St Thomas to continue his dive instructor career. Hurricane Irma forced Ryan to leave St. Thomas and leave all his possessions behind, but he returned to the keys and this time moved to Marathon to start fresh. That is when Ryan found Aquarium Encounters and knew it would be a perfect fit for him!  On his days off Ryan spends every moment he can on or under the water; Diving, spearfishing, paddle boarding, and boating. His favorite dive spot in the Florida Keys is the Conch wall in Key Largo, and his favorite dive spot in the world is called Congo, in St. Thomas.

Come say Hi to Ryan at the aquarium while he’s in one of our many tanks, or working on the island educating guests at our touch tanks. If you are interested, sign up to be a part of this year’s dive certification class with him and become NAUI open water certified!